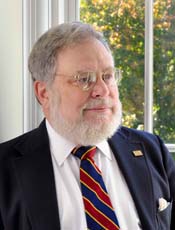 ho'd have thought I would need a personal web site, especially since I already have one for my house? Turns out I do. I've used the web server at Southern Polytechnic State University* for material relating to teaching and learning since the university first had a web server. According to the Wayback Machine, that's been since summer of 1999. (I think it goes back farther than that, but I don't have any evidence.) I built up a small collection of reference material relating to computing that got indexed by search engines and received hundreds of hits per day from all over the world. I also used the web as a way of making assignments, syllabuses, and other material available to my students. When we started distance learning, I included links from my online courses to material that was already on my web site. All was well.

Then, in August, 2011, the people who run the SPSU web site apparently decided that teaching and learning would take a back seat to other uses of the web. They moved all the faculty material to a different server, with no notice, four days before the start of fall classes. All the search engine links broke, which was bad. Even worse, all the links in my distance learning courses broke, and all the links my students had already bookmarked broke. All that breakage could have been avoided by installing some "redirect" commands on the Web server, but they chose not to do that. {sigh}

In spring, 2012, we got word that faculty must move their web "stuff" to a server named "educate.spsu.edu." What kind of a name is "educate" for a web server? It's a verb, for goodness' sake! Why weren't faculty consulted about this? Anyway, most of us moved at least some stuff; I moved as little as possible. That turned out to be a good thing because the people who run the web server scheduled something like twelve hours of downtime during the last full week of spring classes, with three hours' notice. {sigh}

When I complained, my bosses suggested putting content into Blackboard Vista, which existed for teaching and learning, and wasn't controlled from the SPSU campus. Trouble is, Blackboard Vista went away at the end of fall term, to be replaced by something called Desire2Learn. I thought Desire2Learn was going to be a prince, but we kissed it and found out it's a frog!

I was driven to the inevitable conclusion that if I'm going to put material on the web for my students, it has to be on a server that I control so that it does not get jerked out from under my students and me on zero notice, just when we need it the most. I was happy that SPSU allowed me to keep my material within the spsu.edu domain. A big thank you to those who facilitated that! My instructional material wasmoved into the kennesaw.edu domain, so another thank you to the kind people who made that happen. Sadly, that turned out to be temporary. I still have web space, but the only editor available is severly crippled.

Setting up my own web server (within my own domain, not the university's) seemed to be the only solution, and it gave me an easy way to separate those things that don't really belong on an academic web site; things like the Computing Seminar pizza rotation.

So, you can now visit Brown's personal academic web pages!

I solved all of the prlems with academic bureaucracy by retiring in the summer of 2017.

The picture at the top? It's the beach at Pawley's Island, as seen from the front of the house where my friends and I stay. It's there to remind me that there's more to my life than what happens at work.